Virtual, augmented, and mixed reality (VR, AR, MR), collectively referred to as extended reality (XR), have the potential to transform all aspects of our lives, including medicine, science, entertainment, teaching, social interactions, and more. There is, however, an orders of magnitude performance-power-quality gap between the state-of-the-art and the desirable XR systems.At the same time, the end of Dennard scaling and Moore's law means that "business-as-usual" innovations from systems researchers that are typically technology driven and within siloed system abstraction layers will be insufficient. Systems of 2030 and beyond require researchers to learn how to do application-driven, end-to-end quality-of-experience driven, and hardware-software-application co-designed systems research. Such research is hard, but fun. We recently released ILLIXR –-Illinois Extended Reality tested –-the first open source XR system and research testbed to enable this new era of systems research. I will share the pain and the joy of doing such research and our results and implications for both XR in particular and systems research in general. 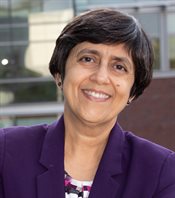 Sarita V. Adveis the Richard T. Cheng Professor of Computer Science at the University of Illinois at Urbana-Champaign. Her research interests span the system stack, ranging from hardware to applications. She co-developed the memory models for the C++ and Java programming languages based on her early work on data-race-free models. Recently, her group released ILLIXR (Illinois Extended Reality testbed), the first open source extended reality system. She is also known for her work on heterogeneous systems and software-driven approaches for hardware resiliency. She is a member of the American Academy of Arts and Sciences, a fellow of the ACM and IEEE, and a recipient of the ACM/IEEE-CS Ken Kennedy award, the Anita Borg Institute Women of Vision award in innovation, the ACM SIGARCH Maurice Wilkes award, and the University of Illinois campus award for excellence in graduate student mentoring. As ACM SIGARCH chair, she co-founded the CARES movement, winner of the CRA distinguished service award, to address discrimination and harassment in Computer Science research events.She received her PhD from the University of Wisconsin-Madison and her B.Tech. from the Indian Institute of Technology, Bombay.