Most recently, this collaboration worked to adapt their creation – a Tele-Robotic Intelligent Nursing Assistant (TRINA) – according to the goals set as part of the ANA Avatar XPRIZE challenge. 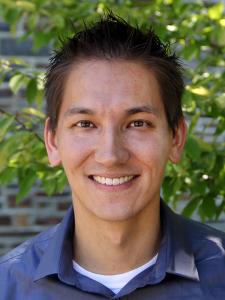 2019. His team has grown to include an augmented reality gaming startup company called VRotors.

TRINA is a robotic avatar that allows the operator to see, hear, navigate and interact with a remote environment. Its development showcases the team’s dedicated effort in artificial intelligence and robotics research.

TRINA’s inclusion in the ANA Avatar XPRIZE semifinals validates it as one of the world’s preeminent efforts in the use of avatars. The reward is a $10 million prize purse that will ultimately recognize a single winner. That project will integrate “multiple emerging technologies to develop a physical, non-autonomous Avatar System with which an operator can see, hear, and interact with a remote environment in a manner that feels as if they are truly there.”

“It’s incredible to be a part of the semifinals of a competition that started with 77 teams from 19 different countries,” Hauser, professor of CS, said. “I’ve long believed that robotic avatars could have the power to connect people even when they can’t be physically present, and the COVID pandemic has provided us with even stronger motivation to develop TRINA’s capabilities.”

Hauser and the students’ path to this semifinal stage of the ANA Avatar XPRIZE began about three years ago. After entering the contest, they first cleared a benchmark to become a “Qualified Team” in January 2020.

Then they worked toward becoming a semifinalist selection through a second round of evaluation conducted by the prize’s judging panel.

“We’ve integrated modern robotics with technological advances in virtual reality, low latency networking, and force sensing to let the operator control TRINA naturally,” Hauser, Center for Autonomy faculty member, said. “With a bit of training, almost anyone can drive the robot around, manipulate objects, and communicate with others as if they were actually there.”

In semifinals testing, Hauser and the students need to prove TRINA capable of:

Moving forward, TRINA’s team will work toward semifinals testing, which concludes in September. The competition will announce finalists in October, and finals testing takes place in June 2022 – after which a winner will be named.

Under Hauser’s direction, this team of nine graduate students – spanning three departments within the Grainger College of Engineering – has enjoyed the collaborative learning experience.

"Working on TRINA is an incredibly daunting task. It is a complex system with a huge codebase that constantly requires interdisciplinary work to function properly. As a natural consequence of this complexity, this project is a great avenue for collaborative work – and there is collective joy whenever we see TRINA reach another one of our milestones,” said Joao Correia Marques, Illinois CS PhD student. “We know every little victory is a product of all our efforts as a team, which makes this a truly rewarding teambuilding experience.”