ECE ILLINOIS distinguished alumnus Jack Kilby’s invention of the integrated circuit was a critical component of computers being placed on board the Apollo 11 spacecraft, helping make the mission possible and a success.

Kilby’s integrated circuit allowed for the development of computers small enough to be placed on the spacecraft and reliable enough for space travel.

“The integrated circuit made it possible to realize complicated functions in a small area. They replaced vacuum tubes, which were bulky, power hungry and most importantly unreliable,” said Naresh R Shanbhag , CSL professor and the Jack S. Kilby Professor of Electrical and Computer Engineering. 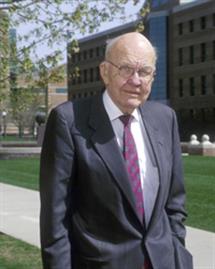 Kilby came to the University of Illinois at Urbana-Champaign as a student in 1941, but his studies were interrupted for service during World War II. He completed his bachelor’s in electrical engineering in 1947.

In 1958, he joined Texas Instruments in Dallas. His work focused on miniaturization-which ended up being critical to land a man on the Moon on July 20, 1969.

Shortly before the Apollo 11 mission, Texas Instruments made resistors, capacitors, transistors, and diodes, but Kilby looked at the possibility of some repackaging that would change modern technology forever. Kilby invented the first integrated circuit in 1958. All its components, both active and passive, were fabricated in a single piece of semiconductor material half the size of a paper clip.

“The most amazing part of this story is that in 1969, just a few years later, the integrated circuit itself was used in the Apollo 11 mission playing a critical role in its journey to the Moon and back,” Shanbhag emphasized.

Kilby’s invention enabled the field of microelectronics to become the heart of modern technology. The integrated circuit has had impact on communications, the computer industry, medical science, radar, and entertainment. Kilby was awarded the Nobel Prize in Physics for his discovery in 2000.

Integrated circuits have also revolutionized our society by becoming the engine that powered the Information Age and now the age of Artificial Intelligence (AI). Today, the convergence of integrated circuits and AI has created a new and exciting dynamic in technology. 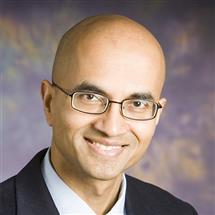 “All that data required to demonstrate AI capabilities needs to be processed somewhere that is cheap, fast, energy-efficient and reliable. And semiconductor integrated circuits are the only solution. It is the only game in town when it comes to a pervasive and cost-effective deployment of AI capabilities in society - from scientific explorations, to autonomous vehicles, for health, transportation, energy, national security, and many more,” Shanbhag explained.

Engineering, at its core, is about solving problems. The manned space program leading up to Apollo 11 and the first Moon landing is a powerful example of how technology and innovation, combined with collective will, can solve huge problems.