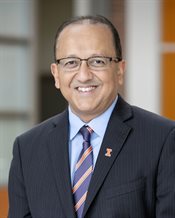 Rashid Bashir is Dean of The Grainger College of Engineering, the Grainger Distinguished Chair in Engineering and Professor of Bioengineering at the University of Illinois at Urbana-Champaign. Previously, he was the Executive Associate Dean at the Carle-Illinois College of Medicine (2017 – present), the Abel Bliss Professor of Engineering, Head of Department of Bioengineering (2013 – 2017), and Director of the Micro and Nanotechnology Laboratory (a campus-wide clean room research facility) (2007 – 2013). Prior to joining UIUC, he was at Purdue University (1998 – 2007) with faculty appointments in Electrical and Computer Engineering, and Bioengineering. From 1992 to 1998 he worked at National Semiconductor Corporation in Santa Clara, CA as Sr. Engineering Manager.

He graduated with a PhD in Electrical Engineering from Purdue University in 1992. He has authored or co-authored over 250 journal papers, over 200 conference papers and conference abstracts, and over 120 invited talks, and has been granted 50 patents. He received the NSF Faculty Early Career Award, the 2012 IEEE EMBS Technical Achievement Award, the Pritzker Distinguished Lectureship Award from BMES in 2018, and the 2021 American Institute for Medical and Biological Engineering (AIMBE) Professional Impact Award. He is a fellow of IEEE, AIMBE, AAAS, BMES, IAMBE, RSC, APS, and NAI. He has been involved in 3 startups that have licensed his technologies. He was part of the core founding team and co-chair of the curriculum committee for the Carle Illinois College of Medicine, the world’s first engineering based College of Medicine at the University of Illinois at Urbana-Champaign.

His research group is interested in developing new technologies for precision and personalized medicine, and 3D bio-fabrication of cellular systems. Using bionanotechnology, BioMEMS, and lab on chip, he is working at the interface of biology and engineering from the molecular to the tissue scale, and aiming to make an impact on grand challenges in health and medicine including cancer, sepsis, and others.