In recognition of his scientific achievements and influential contributions toward unifying optimization, control, and stochastic networks for the design and analysis of computer systems and communication networks, CSL’s R. Srikant has received the 2021 ACM SIGMETRICS Achievement Award. This award is given to a senior researcher who has made outstanding contributions to computer and communication performance evaluation.

“Srikant is highly deserving of this award since he has been contributing to the networking and applied probability community for many years with outstanding results which have had major impact on the academic community and industry,” said Klara Nahrstedt, CSL Director and Ralph and Catherine Fisher Professor of Computer Science. “In addition to his research results, he is a great colleague and member of CSL who very much cares about creating a strong collaborative and productive environment in CSL leading to highly impactful results of CSL members. “

Srikant joined the University of Illinois Urbana-Champaign in 1995 and is currently the Fredric G. and Elizabeth H. Nearing Endowed Professor 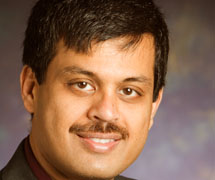 of Electrical and Computer Engineering (ECE) and the Co-Director of the C3.ai Digital Transformation Institute. He started his research career designing algorithms to control internet congestion; those technologies were later used to allow computers in data centers for Google, Amazon, and Facebook to communicate with each other. Srikant believes that one of his group’s most significant accomplishments has been its proof that an algorithm exists that can ensure a data center’s size won’t cause its users to experience large delays.

Srikant credits his research group and his colleagues for the award. When asked what it means to him to win, he responded, “It means I’ve had great colleagues, collaborators, and students, and I’m at a great place,” said Srikant. “I’m happy, honored, humbled, and I’m very lucky.”

This is not the first time Srikant’s achievements have been recognized. He received the IEEE Koji Kobayashi Computers and Communications Award in 2019, the INFORMS Applied Probability Society’s Best Publication in Applied Probability Award in 2017, and the IEEE INFOCOM Achievement Award and IEEE INFOCOM Best Paper Award in 2015, among other honors. He has been an IEEE Fellow since 2006, won an NSF CAREER Award in 1997, and has been honored for excellence in teaching more than 15 times.

Lately, Srikant has been interested in researching why and how well artificial neural networks work, specifically with respect to reinforcement learning. His colleagues believe that no matter what problems he chooses to pursue, he’ll be successful.

“This prestigious award affirms Srikant’s influential contributions to this field,” said Bruce Hajek, CSL professor, previous ACM SIGMETRICS Achievement Award winner, and ECE department head. “He will continue to have a long-lasting impact, and I’m proud to be his colleague.”